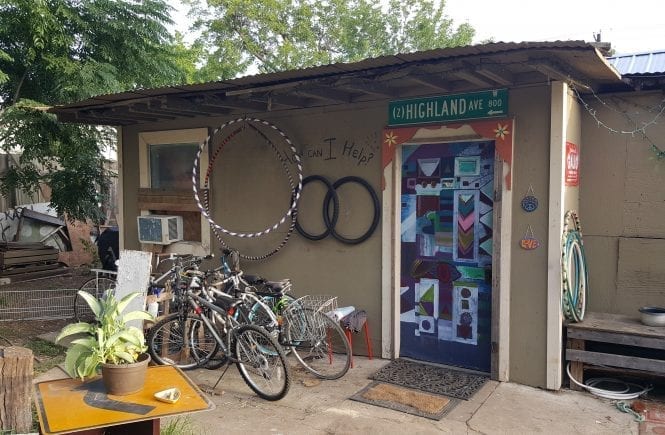 My final stop of the day was at the Roots Cooperative in Austin, Texas, for their open house and ‘meet and greet’ for those interested in upcoming available rooms.

“We are one of the 8 community cooperative here in Austin Texas. Our focus is on environmental sustainability and community building. We are governed through consensus process and highly value communication. Roots was founded by 10 activists out of the Occupy movement and takes a strong political and social stance for equality by gaining awareness of societal generated oppression and creating a new standard for non-hierarchical relationships.” – Fellowship of Intentional Communities Webpage

This is a view of the rental house turned underground cohousing community, which includes a couple of trailers for additional housing space. It’s tucked into an older neighborhood that is slowly being updated and gentrified with newer homes — a consistent trend in Austin. On the interior wall entrance of the house was a print of Hieronymus Bosch’s The Garden of Earthly Delights, a painting from over 500 years ago expressing various themes in humanity transitioning from the left panel to the right.

“Depicting a fantastically surreal world that ranges from orgiastic pleasure to terrifying horror, Hieronymus Bosch’s The Garden of Earthly Delights has fascinated the public for centuries. Now housed in Madrid’s Prado Museum, it’s hard to believe this bizarre painting—filled with Willy Wonka machines and hybrid creatures caught in strange acts—was painted over 500 years ago.” — My Modern Met Webage I first came across this painting in Leonardo DiCaprio’s documentary, Before the Flood, which examines climate change focused on the science of the issue: The human impact of fossil fuel consumption altering our planet in a long list of ways.

Past the main hall entrance and the front bedrooms, I entered the upper kitchen and library/storage nook area. Initially, I was really impressed with how this small space could house enough people to make it a cohousing community — until my hostess took me through the ‘rabbit hole’ (meaning the small blue mushroom door to the back half of the house.) Passing through the blue mushroom mini-door, I entered the back half of the house. This portion had another kitchen area, the cohousing organizational charts for cleaning/chores, a community living room space, and a bedroom that was available for rent.

This first board outlined the cleaning responsibilities on a make-shift chalkboard calendar, along with the time requirements for each member of the house.

The second board was a divided whiteboard outlining the upcoming agenda meetings, ongoing house projects, committee roles, community grocery shopping list, side meeting topics, and important contacts. I found this board to be pretty impressive in terms of the scope of all it entails. Here’s a picture of the rear room for rent, which was one of the biggest rooms in the house, and includes a large TV against the entrance wall (not featured in this picture.) We took the open house tour outside to the backyard, which was an eclectic hot-mess of overgrown grass, extra materials, a bunch of bikes, a hell-a-lotta hoola hoops, and other artistic pieces and signage throughout the space.  While some of the residents lived in the trailers and spaces in the backyard, it was a collective goal of theirs to revitalize the backyard into a production garden. This is another view of the backyard, where you can see some of the garden beds, the former chicken coop in the far back corner, and various other seating and structures. An additional picture of one of the trailers in the backyard and the community fire pit right in front of it, where the residents sometimes host seasonal celebrations for equinoxes. And a final picture of the backyard, with a hidden blue camper van in the back next to the former chicken coop. I came in with higher expectations from what I researched online through Facebook pictures and the overall profile on the Fellowship of Intentional Communities’ website. So seeing some areas in disrepair and needing love was kind of disheartening.

However, I learned that the current residents were mostly ones who made it through a rougher period where the other former residents didn’t put in much energy into the cohousing collective effort. So the group implemented stricter membership requirements, and are actively seeking residents who can contribute to the collective goals.

Overall though, it was refreshing to see a cohousing model in Texas – especially one of younger people around my age, who are putting in active effort into self-governance and collective living!